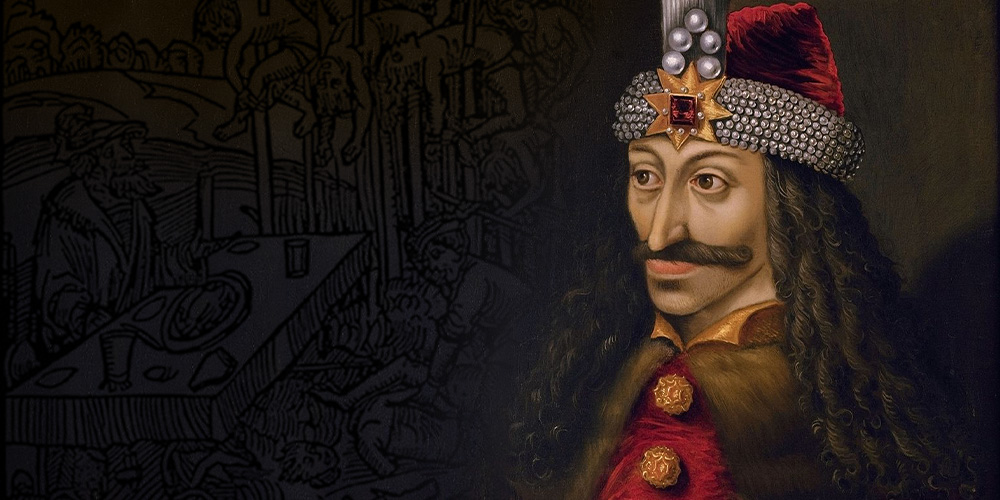 Welcome to Horror History, our new series on real life historical horror stories. Look for panels and more events on this topic during our North Carolina Horror Convention!

Vlad Tepes III was born between 1428 and 1431, the second son of Vlad Dracul (The Dragon).  Vlad II led the order of the dragon thus giving him the name Dracul, this being the case, Vlad III obtained the title Dracula (Son of the Dragon). 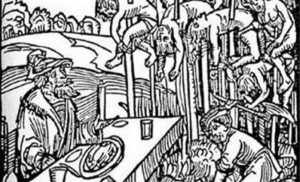 Vlad was given the name “The Impaler” because his preferred method of punishment was execution by impalement.  Although impalement has been described throughout history as torture, Vlad was an advocate of law and order and believed this penalty would ensure it was obeyed under his rule.  Vlad III held power 3 times; first in 1448, again from 1456 to 1462 and the final time in 1476.  It has been said that lawlessness was so rare during the reign of Vlad III that vendors would leave their goods unattended in the town markets with no fear of theft.

One story tells of a merchant that claimed to have 100 ducat stolen from his cart. When it was reported to Vlad, he ordered that 101 ducat be put in the man’s cart.  The merchant went to Vlad to report the extra money and found that Vlad had two stakes prepared. He had impaled the man that had robbed the merchant on the first and the second stake was unoccupied.  Vlad told the merchant that the second stake was meant for him – had he failed to return the extra ducat.

Another example of Vlad’s ruthlessness can be seen in the tale of 2 Ottomans that were to deliver a message to Vlad and refused to remove their hats while in his company. Vlad ordered that since they insisted on keeping the hats on, they were to be nailed to their heads.

Vlad never feared retribution for his actions, he believed they incited fear in others and was once quoted as saying, “If I am feared by the right people, we will be strong”.

Vlad has been known to behead, boil, burn and skin his enemies, but the greatest example of Vlad’s cruelty was seen when he was faced with an advancing Ottoman Army too powerful for his army to defeat.  When Vlad refused to pay the Ottoman sultan his annual tribute, the sultan sent men to collect the tax.  Vlad had them impaled.  A year later an army of 90,000 Ottoman soldiers (3 times the size of Vlad’s Army) were sent to topple Vlad’s regime.  When the army arrived at Walachia, they found the gates opened wide and no guards on duty.  They entered the city and found several acres of land covered with over 20,000 stakes and an Ottoman prisoner of war impaled on each.  The scene was so ghastly that the army withdrew and returned to Turkey.  Upon their return the sultan was told of the forest of the Impaled they had encountered.

How did Vlad the Impaler die? Vlad was accidentally killed in battle by one of his own men in Dec of 1476 or Jan of 1477.  His name was born again in 1897 with the release of Bram Stoker’s DRACULA and will live on in the realms of Horror, but the story did not end with him. Vlad Dracula is the great-uncle of Elizabeth Bathory, the notorious Countess who murdered hundreds and bathed in her victims’ blood in search of eternal youth.

Stay tuned for more of our Horror History series.