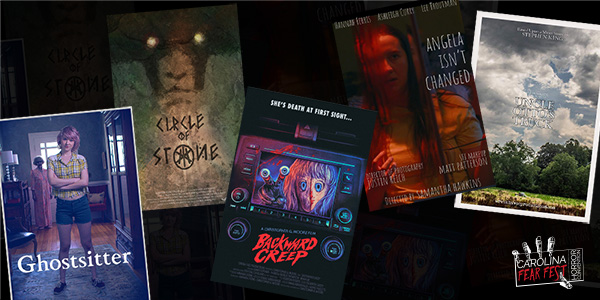 Obviously since our event was cancelled, our 2020 Film Fest entries weren’t showcased in the way they deserved. Check out some of our favorite films from our entries here!

Two serial killers work together to skin their victims and sell them to an underground flesh market. When a sale goes bad and a buyer is killed, pressure from the organization forces the usually-methodical Flesher to take reckless actions that lead to a paranoia he can’t escape.

Five college students embark on a paranormal investigation of Dead Woman’s Hollow Road, a hub of mysterious deaths and strange phenomena along the Appalachian Trail. The probe turns deadly when people in their camp begin dying. For those still alive, their only hope for survival is a wet behind the ears Sheriff who must come to terms with the fact that the darkness surrounding his quiet town isn’t supernatural, but an evil that’s very real.

In the vein of Twilight Zone and Tales from the Crypt, a creepy host, the “bum”, breaks the fourth wall to introduce four spellbinding vignettes of suspense and horror to transport the viewer into FEVER DREAMS.

The year is 1865 – the close of the Civil War. Two brothers desert from their unit after a deadly battle and seek refuge in an abandoned cabin.

While interviewing for what she thinks is a babysitting gig, a young woman is horrified to learn the job actually involves looking after the ghost of a deceased elderly lady who is too stubborn to move on.

When rural cops respond to a call for help from one of their own, their search through the woods reveals what happened to a young girl stolen away sixty years before. They find themselves stuck in a supernatural world with their only escape to fight their way out.

Based on the short story by Stephen King, “Uncle Otto’s Truck” tells the tale of a man obsessed by a truck that he’s convinced is out to get him.

A chat computer between two friends is interrupted by an email which contains a video that they can never forget. At first seems to be a simple cruel game but will gradually become a macabre chase to life or death.Director Biography – Ignacio López Vacas

Create Your Killer is the story of three young people, Amanda, Adam and Isabella, staying in playing videogames on a Saturday evening. Suddenly they find a VHS-tape with the game ”Create Your Killer” and everything changes.

Paul, a shy, middle aged milquetoast living alone with his domineering mother lures a young, vulnerable woman into their home under the guise of an apartment for rent.

A group of cosplayers driving to an anime convention are haunted by a supernatural entity after reading a cursed Manga.

Recently released from the institution, Dan is hired by the church to renovate an old building. But a child’s voice drives him to find a file cabinet filled with the secret files of pedophile priests. Dan takes one and decided to confront Father Bob.

Because of physical distancing restrictions, we’ve decided to space out our panels and instead host horror film premieres in Raleigh’s Alamo Drafthouse theatre! You can watch the world premieres of Kill Giggles, Bloody Summer Camp, and Remnants, starring some of our very own celebs, with exclusive behind the scenes footage and cast and crew meet and greets!